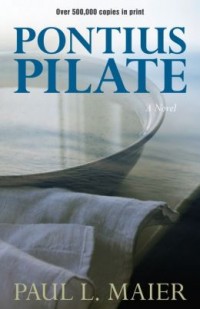 Here is an historical novel on the life and times of Pontius Pilate from an award-winning historian who is a Christian. Maier is a retired professor who is an expert in ancient history and knows the times of Pontius Pilate very well. If you would like to gain a better perspective on who Pilate was (as well as what the Roman days in the first century were like), read this!

This FREE offer is only available today, 8/25.

In a world full of DVD extras, behind-the-scenes commentary, and social media, people are used to getting the story behind the story. Readers want to understand not just what happened but why. This historical novel of the man who washed his hands of the crucifixion does just that! Award-winning historian and best-selling author Paul L. Maier has created a compelling style of documentary fiction. He uses what is historically known of Pilate’s life and rise to power, adds in the known political climate of first-century Judea, and unveils the colorful, untold story that changed history for all time. He provides intriguing answers to questions such as: What really happened at that most famous of trials? Were the proceedings against Jesus legal? Did cowardice or necessity motivate Pilate’s judgment? What became of this successful Roman politician after his verdict? Filling in the details of Pilate’s early career in Rome, Maier captures the drama of imperial Rome under the all-powerful Tiberius Caesar, the plottings of his political allies and enemies, and his relationship with his beloved but ambitious wife, Procula. His great moment arrives as he exchanges the intrigues of Rome for the bewildering environment of Judea, navigating new and dangerous waters. In Pontius Pilate, Maier paints a picture for modern readers to help them understand the behind-the-scenes complexities, political and religious realities, and ultimately, the humanity of the people we know from Scripture.