Home / eBooks--Kindle / FREE: The Bondage of the Will (Modern English Abridgment) by Martin Luther eBook 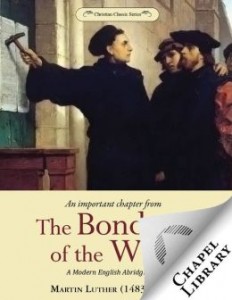 Reformation Day may be officially over, but that doesn’t mean you must stop being interested in the Word of God like the Reformers were! Here is one of Luther’s classic works, abridged in Modern English.

This FREE offer is only available for a limited-time.

The Bondage of the Will is considered by many to be Luther’s most important book, and it stands today as one of the great classics in Christian history. He wrote in 1525 at the beginning of the Reformation in answer to a work by Erasmus, the classical scholar and humanist (1469-1536). Both Erasmus and Luther rejected many of the erroneous practices of the Roman Catholic church. But Luther went further to challenge the Roman teaching of salvation by works. Erasmus pleased the Pope by writing to uphold the Roman dogma of “free will,” that man could of himself decide to choose for his salvation. Luther saw correctly that the Biblical doctrines of the depravity of man and salvation by faith alone stand together. He declared Erasmus to be an enemy of the faith, and wrote The Bondage of the Will to establish this doctrine at the core of evangelicalism. The Modern English Series are modernized abridgments of great Christian classics, for a blessing to many worldwide.